As technologies continue to drive a huge transformation throughout the Automotive industry, it’s easy to get lost in all of the names and terminologies that are being thrown into the mix. Highly automated, autonomous, driverless, self-driving – these are a few of the words being used to describe visions for the car of the future. Throughout the media, it has become common to use words like “driverless” as an all-encompassing term for all kinds of vehicles that, in fact, differ greatly in their levels of automation.

The Department for Transport has defined an Autonomous Vehicle as ‘one in which a driver is not necessary.’ You may feel as though having self-driving cars on our roads is way off in the future, and you wouldn’t be wrong as we’re still in the test phases of these vehicles, connected cars, however, exist all around us. So, what actually is a connected vehicle? – A connected vehicle is any vehicle which has access to the internet and usually has a wireless local area network, this allows the car to share its internet access with other devices such as phones, both inside and outside of the vehicle.

Connected and Autonomous vehicles are often discussed by their level of automation as outlined in the SAE International Standard J3016. These levels of automation are defined as follows: 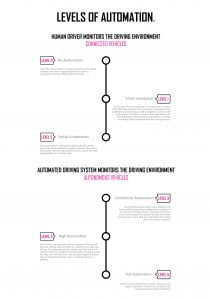 By going through the levels of automation, we can better understand the relationship between Connected and Autonomous vehicles as well as where one ends and the other begins.

For more information or to get in touch with one of our experts, call us on 02476 308 035 or say hello@majentasolutions.com