Today, data is a very critical asset for most companies throughout the economy. Managing it means dealing with several requirements such as security, redundancy, performance, reliability, costs and more. The market can offer different kinds of storage platforms which can be grouped into four families of technologies, DAS, NAS, SAN and SAN Ethernet.

What’s the difference? Which one is better? Of course, it depends on who’s it for. 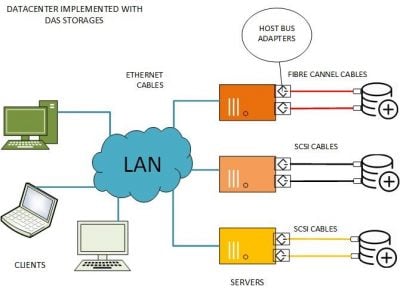 This solution is the older block-level storage technology, designed to extend the disk space capacity of a host, either a server or a workstation. The communication is established through the protocols SCSI, SAS, SATA e Fibre Channel plugging the cable directly in the Host Bus Adapter which is often equipped with a controller RAID. 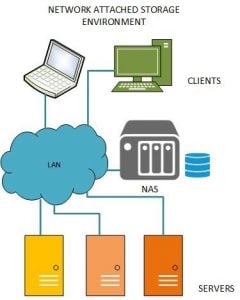 NAS is a File Level Data Storage System. On this storage platform, the data is transferred, stored and accessed at the file level, meaning that the data is identified by file name and byte offset. This device, with its File System, is attached to the Network Lan and allows others authenticated hosts within the same Lan to access and share the data files. The data is stored into a Redundant Disk Array (RAID) organised in Logical Unite (LUNs) and is shared using network file sharing protocols such as CIFS, NSF, SMB, etc…

This is a block-level storage system, it addresses data by disk block ID and transfers a raw disk block, like a chunk of bytes. For this reason, this system has lower latency and higher performance than any other storage platform. It is the most complex solution, if we have a look at its architecture, we can see that a SAN is a system composed by several and separate pieces of hardware; like the disk storage array, the console, the storage processor, the fibre channel switches, all interconnected among them. 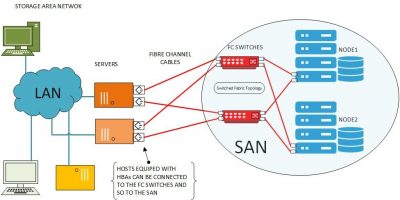 To communicate with the SAN, the host of the network needs to be fiscally connected to the Storage Area Network. The connection between the host and the SAN is made plugging the Host Bus Adapter of the host (a device which allows the transmission of data over a fibre channel cable), into the fibre channel Switches, this kind of topology is known as Switched Fabric. With this topology, the connection between devices is managed by the Fibre Channel Zoning which allows the SAN makes available its several devices and ports to a single  Host Bus Adapter and ensuring that each host connected to the SAN is only allowed to access to a defined subset of devices/port.

Probably this is the case where you can have your cake and eat it, as this solution gives you block-level SAN protocol almost at the same performance as Fibre Channel but with a cost considerably lower in terms of money and management ensuring strong reliability also over long-distances. For these reasons, many companies are adapting for their DataCenter the SAN Ethernet platform. There is two main kinds of SAN Ethernet, which use two different storage protocols, iSCSI, and FCoE. 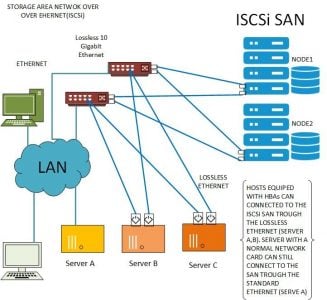 When the initiator and the target establish the connection, the storage presents the LUNs to the host which will detect them as locally attached SCSI drivers exactly as in an FC SAN environment. To implement this solution it doesn’t need any additional hardware (for better performance it is better to go for a hardware ISCSi initiator solution, equipped with Host Bus Adapter). The wiring it is drastically reduced, making this solution easier to implement and to manage rather than an FC SAN.

The main feature of transmitting data over the Ethernet is in common with the NAS system but the iSCSI is much more performant because it is a SAN protocol, therefore it is able to transmit I/O SCSI blocks over long distances across a WAN.

Finally, the iSCSI is based on a non-proprietary technology, the TCP/IP, and this means that it is completely relived by using a specific network brand storage device.

This storage platform transports FC frames over the Ethernet, this means that you can send FC packets using the 10 GB ethernet connection, so it is possible to use the FC capabilities included the Zoning. 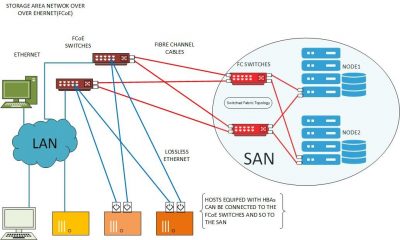 On the Hardware aspect, to implement this solution you need specific network cards called Converged Network Adapters (CANs) which have both HBA and NIC functionality and switch FCoE to transport and route the FCoE packets over the Ethernet.

On the software side, to give to the FCoE the same features of FC protocol, the FC frame needs to be encapsulated into an Ethernet frame, but Ethernet has not been projected as Lossless protocol and the packets are dropped in case of congestion or collision. To fix this problem and be able to transport SCSI, the native Storage protocol, the Ethernet protocol needs an extension which avoids the packets loss turning into a Lossless Ethernet.

One of the main differences with iSCSI protocol is that because the FCoE protocol operates directly on Ethernet layer, it cannot be routed at the IP layer, and it cannot be used for SAN to SAN replication across different networks, unlike iSCSI which works on top of TCP/IP stack.

IT Systems and Application Engineer at Majenta